What started out as a 2-3 minute video project turned into an 8-minute mini-documentary that continues to inspire residents, community activists and politicians in the culturally diverse city of Lynn, Mass.

“An Artful Alliance” is about the work three nonprofit groups are doing to revitalize a poor neighborhood, help teens, and at the same time build a missing link to a bike path north of Boston.

This video, released on Sunday, Oct. 23, 2016, was well received in the Lynn community. It garnered more than 5,000 views in just four days after a Lynn city councilor posted it to his Facebook page. There are plans for several public screenings and to use the video to help spur economic development in the city. Some comments about the video from these nonprofit groups include:

FROM LISA WALLACE, FOUNDER OF ‘ONE COMMUNITY, ONE VOICE’:
“Mark, I have no words! This was amazing! Thank you so much! I love that you gave my boys a voice! Thank you for recognizing them as such an important part of this project! I wish we could do a release party!!”

FROM BRUCE ORR, ART THERAPIST AT “RAW ART WORKS”:
“Thank you Mark, for all of your work! It looks wonderful! I love the interviews with Josh and Anthonie. I’m all for doing a screening party.”

FROM CLAY LARSEN, PROJECT MANAGER AT “BIKE TO THE SEA, INC.”:
“Wow Mark! Very powerful video and very spot on…I think this video should be shown often all over the city.”

This project was funded by a grant from Emerson College and a donation from Reel Partners Media. We were happy to shed light on this noble work and are happy it will be used to improve the lives of residents in Lynn. 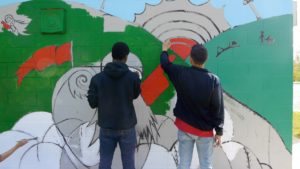 Co-founders Phil Santoro and Mark Micheli are seasoned journalists who have written stories and produced videos for major media outlets as well as corporate clients.

Phil worked as a reporter and copy editor at the Boston Globe and has more than 20 years experience working as the director of corporate communications for Verizon in Massachusetts where he oversaw print, video and social media public relations campaigns.

Mark is a multimedia journalist, editor, and documentarian who was the news editor and manager for Boston.com during its heyday and a reporter for the Boston Business Journal. He also worked at innovative internet companies, including Lycos, AT&T New Media Services and AOL's Patch.com. He is an adjunct professor at Emerson College where he teaches multimedia courses in the journalism department.